Over the years living in Japan I saw a good variety of Autumn foliage spots. Visiting each garden and park every year to enjoy the season’s change let me develop special connection with some of them. I am going to share my top 6 Autumn leaves locations in Tokyo in this article, but in fact there are plenty of other good locations to see as well! Looking them up (especially in Japanese) might take a while, so I made a special map with Autumn foliage locations. Check out which spot is next to you and make sure to pay it a visit if you’re in Tokyo in October to December!

Autumn is my favorite season of the year. Surprisingly, before I came to Japan for the first time, it was my least favorite! The reason is that in Russia, where I am from, autumn is relatively short. In Moscow the leaves start to fall around September, and by the middle of October they all are usually gone, leaving only about 2 weeks to enjoy the “Golden Fall” – autumn foliage. Even worse, my birthday is at the end of November – that “sweet” spot when all the leaves are gone, it is freezing, but not snowing yet. As a nature lover, I was quite disappointed that my birthday falls on such a gloomy time of the year.
But it changed dramatically since I experienced Japanese autumn for the first time. From October to December the leaves across the country start to change its colors to all shades of red, orange and yellow. Thanks to the vivid colors of Japanese maple trees, this season became especially popular with tourists!
So let’s dive into the vibrant Autumn colors!

Kiyosumi Garden originally was the residence of an Edo era business magnate, and the next owner, a feudal lord, turned it into a garden. Later, in 1878, the founder of Mitsubishi acquired this garden for his employees and valued guests.

The garden is famous for its landscape that consists of a pond with water from river Sumida, rare landscape stones brought from around Japan, and “isowatari” – a special stepping stone pathways across shallow paths of the pond. You can see the carp fish, turtles and waterfowls there. Other interesting spots are a traditional teahouse and a haiku by Matsuo Basho on one of the landscape stones:
“an ancient pond / a frog jumps in / the splash of water”

The autumn leaves season typically starts around the middle of November.

Koishikawa Korakuen Garden was built during the Edo period as a residence for the Tokugawa family, the powerful rulers at that time. Dozens of maple trees are planted around the ponds of the garden, and they start to change their color from end of November to beginning of December, creating a vibrant mix of red and orange colors around the three ponds. 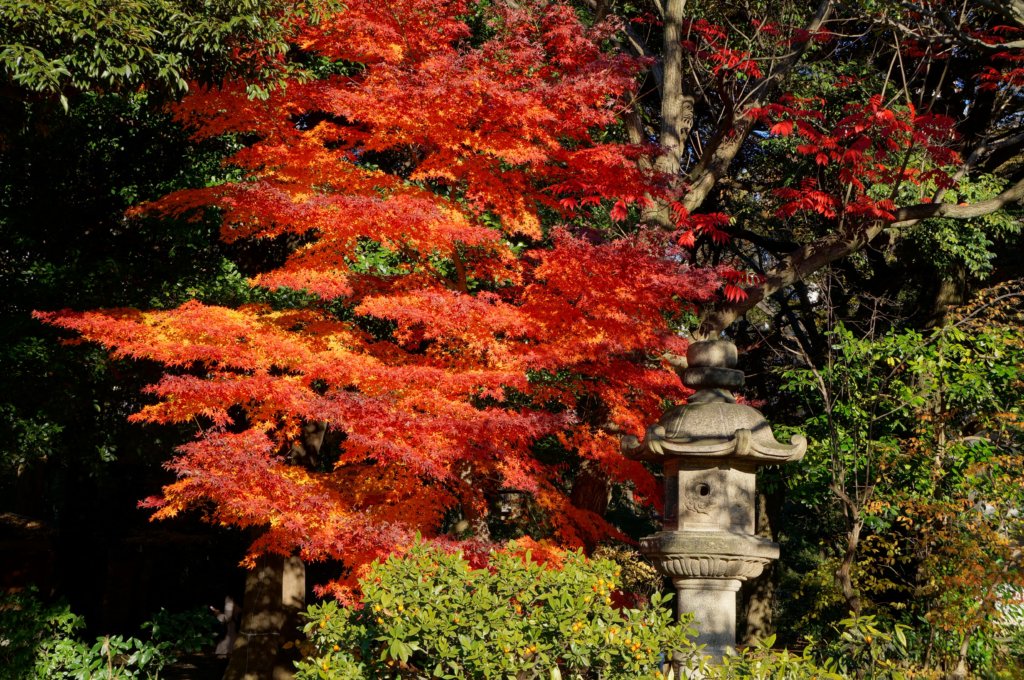 Don’t miss a small ginkgo groove hidden near the Southeast corner of the garden!

Rikugien is a perfect example of a strolling garden – it has multiple strolling paths that create a complicated network. It will take about an hour to walk through the paths in a leisurely pace, hand in hand with your partner! If you are a little bit chilly, savor some Japanese sweets and tea in one of the tea houses.

The maple trees typically reach their peak around the end of November to the beginning of December. Too busy during the day? Come there at night!. Rikugien garden is unique to other gardens because it also has a light up event in the evening! The dates and time vary by year, but the last years the trees, paths and observation points were lit up after the sunset until 9 pm. Combined with a dinner before or after the visit, it makes a foolproof evening date idea!

You are into Japanese gardens, but your special one prefers Western architecture? How about both at the same place?
This garden features a rare western-style residence built by an English architect, Josiah Conder, who is also the creator of several Western residences and a cathedral in Japan. The house now serves as an art museum. There is a majestic rose garden right in front of the house with over 90 varieties of roses. At the time of my visit in November, a lot of them were in full bloom. Therefore, you can enjoy blooming roses and iconic Autumn foliage at the same time!

The Japanese garden below the Western garden grants a romantic offering – the pond is shaped as a Japanese character -“心”, which stands for “love” and “heart”. How romantic is that?
Hours: 9:00 to 17:00 (entry until 16:30)
Admission: 150 yen

Shinjuku Gyoen is a large park right next to the bustling Shinjuku station. There are several main areas, among which two are especially attractive during the Autumn foliage season.

The ginkgo valley next to a symmetrical French garden is definitely worth a visit, as it is one of the iconic Autumn views at Shinjuku Gyoen park.
The traditional Japanese landscape garden features pavillions, ponds and, you guessed it right, a large number of maple trees. They can also be found at Momijiyama – literally “the maple tree mountain”, situated in the South-Eastern part of the park. The colors usually appear from the middle of November to the middle of December. 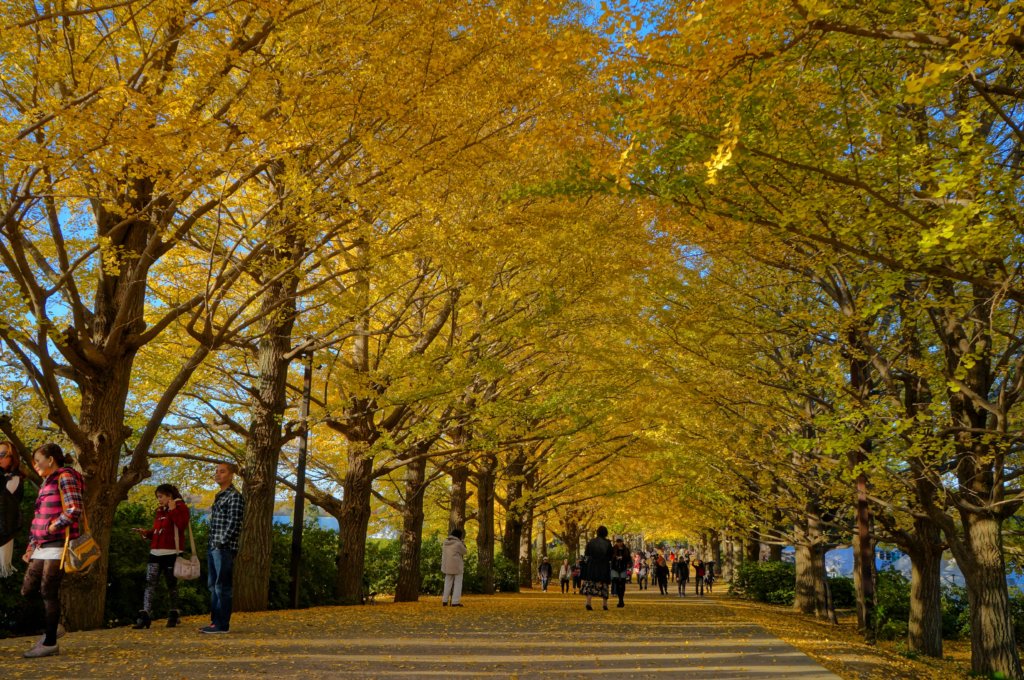 Built in commemoration of the 50s anniversary of the reign of the late emperor Showa, this park is a superb destination for a picnic date in the suburbs of Tokyo. The ginkgo and maple leaves typically start to change its color around two weeks earlier than in central Tokyo. You can observe the gorgeous maple trees in the Japanese Garden of the park, but my favorite area is the ginkgo valley in the southeast part of the park. Be prepared to the smell of ginkgo trees though! 🙂

Lastly, all gardens of Tokyo reach the peak of their beauty in different pace, so my tip would be to check the autumn foliage condition of the place that you would like to go online. Enjoy the mesmerizing Japanese Autumn!

Reporter
Lucia Grey
Bachelor of Arts
Currently living and working in Tokyo. Having educational background of Japanese language and culture studies, I love showing people Japan from a local perspective. When I am not hiking, bathing in onsen or eating my favorite seared salmon sushi, I usually plan my next trips while drinking endless cups of tea.