If you and you significant one share your love for anime, you must be familiar with the anime “Your Name” (“Kimi no Na wa” in Japanese). It is a story about two high school students, a girl called Mitsuha, living in a tiny village of Japan, and a guy named Taki, living in the bustling city of Tokyo. They both dream about living in a different place, and one day their dreams come true – they wake up to find out that they swapped bodies. Imagine how exciting it was for Mitsuha!

The creator of the anime, Makoto Shinkai, takes his inspiration for detailed backgrounds from Tokyo architecture and urban views. If you visited Tokyo, you have a specific neighborhood that stands out and symbolizes Tokyo for you. For Makoto Shinkai, it is Shinjuku, which also became the background for his other famous works: “5 Centimeters Per Second”and “The Garden of Words”.

Many of the locations in the anime exist in real life. As a result, the anime fans created a new activity – pilgrimage to the real-life anime locations. Even the word “seichijunrei” – “pilgrimage” is the same one that is used for visiting famous shrines and religious locations!

“Your Name” tells us a magical romantic story amid breathtaking views and hand-drawn cityscapes. Take this opportunity to travel into the anime world with your love!

Before we set off for our adventure, here are a few suggestions to make the walk pleasant.

First of all, wear comfortable shoes. It is a walking adventure, and no one wants to have blisters, right? Second, bear in mind the weather, especially in July and August, when the heat stroke can send you to the hospital instead of the anime world. Make sure you drink enough water and dress appropriately for the season. And finally, be mindful of your surroundings: don’t stand in the traffic area to take “that perfect shot” and don’t obstruct the pathway for others in the crowded areas.

All the locations on the Map. Spoiler alert, I would strongly suggest watching the movie before reading this article. 😊

Now, we are ready to explore the enchanting world of Makoto Shinkai’s “Your Name”.

Locations from “Your Name” in Shinjuku

The Intersection Behind Shinjuku Police Station 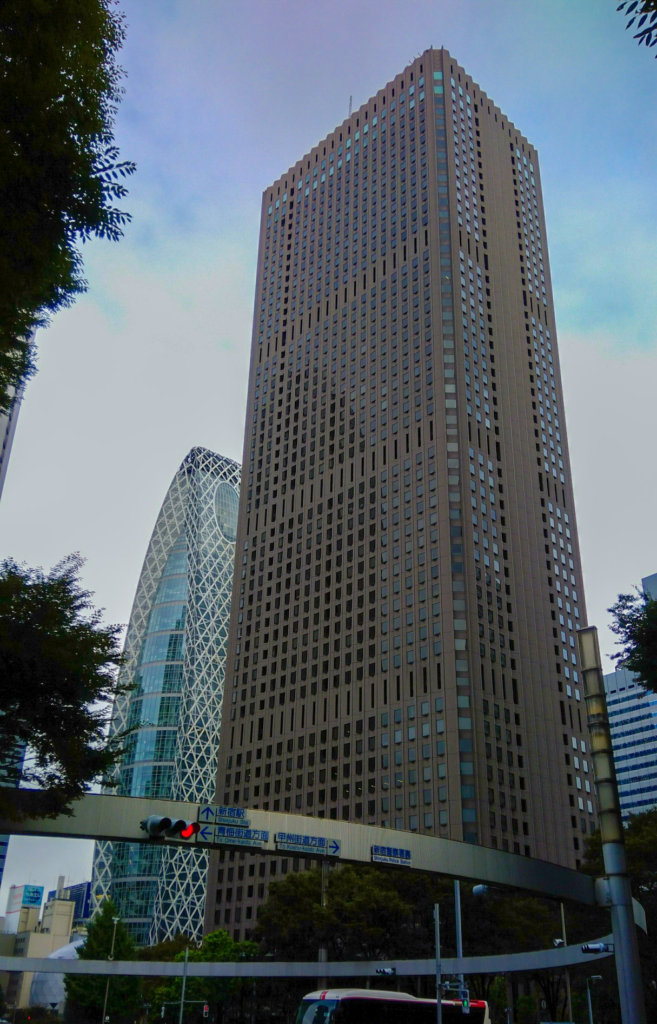 Urban scenery used in the opening scene and promotional video of “Your Name”.©Lucia Grey /JapanFor2

Urban scenery used in the opening scene and promotional video of “Your Name”.

A good place to start would be the intersection behind Shinjuku police station. Surrounded by skyscrapers, this metal ring with traffic lights brings us the feeling of the high-tech, massive city. You can see the prominent Mode Gakuen Cocoon Tower – 204-metre (669 ft), 50-story educational facility. The cyber-city impression is enhanced with a great soundtrack by Radwimps – “Zen Zen Zense”, favored by the fans. This spot was skillfully used by Makoto Shinkai to illustrate the striking difference between the bustling city of Tokyo and the rural town of Hida, where Mitsuha is from. This location appears in the opening of the movie as well as the promotional video. The easiest way to get there would be to go through Shinjuku West Exit and follow  Maps directions until you reach the LOVE statue, created by an American artist Robert Indiana. 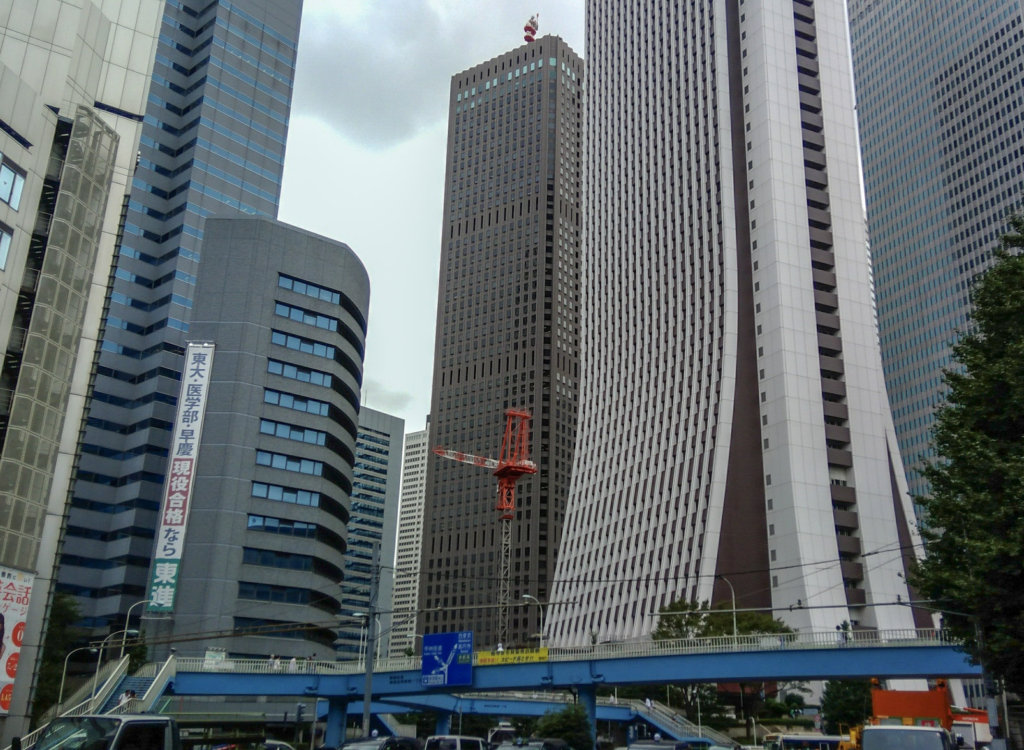 Take a walk of the bridge to recreate the scene from the anime.©Lucia Grey /JapanFor2

Take a walk of the bridge to recreate the scene from the anime.

This location was used in the scene of Mitsuha and Taki crossing paths on a snowy day. If you want to take a picture from the same angle as the illustration, stand near café Veloce, where I dropped the pin on the Map. Don’t miss a chance to have a short walk on the bridge and admire the urban views. Located near Takarazuka University, it’s a great spot to observe the monumental modern architecture of Tokyo. Fun fact, the Sompo Japan Nipponkoa Head Office Building in the background have also appeared in the 1984 movie “The Return of Godzilla”!

One of the most crowded areas in Shinjuku.©Lucia Grey /JapanFor2

One of the most crowded areas in Shinjuku.

Appears in the scene of Tokyo commuters watching the comet fall. The gigantic ads are for “Ironman karaoke” and Acom – one of the largest Japanese consumer loan companies.
From there, cross the pathway under the bridge to your left and you will reach the Yunika Vision square. 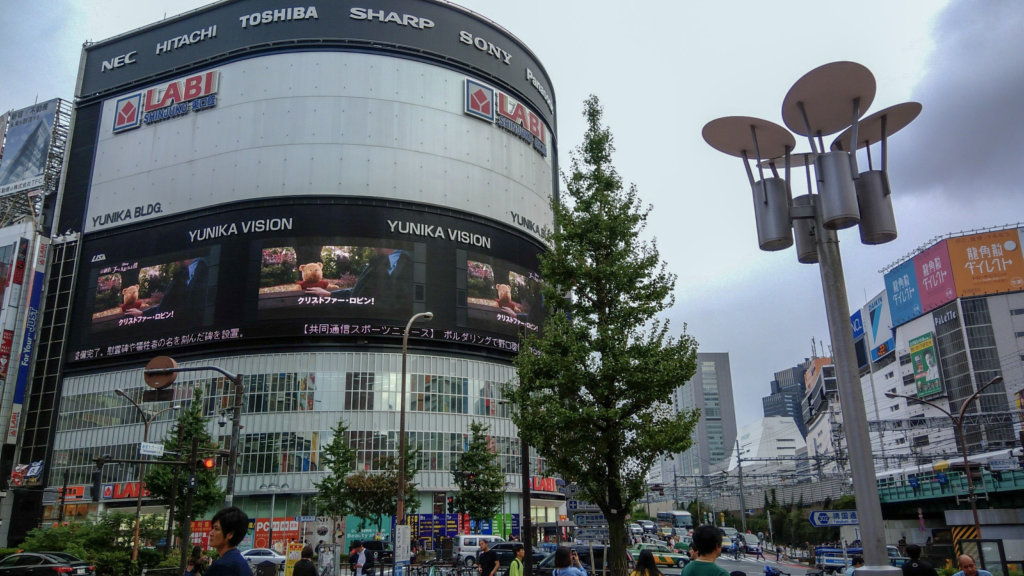 The gigantic screens draw attention of every Tokyo commuter.

The gigantic screens draw attention of every Tokyo commuter.

Yunika Vision is Japan’s largest 3-panelled high vision LED display signage that broadcasts live shows, music videos, promotional videos, news and advertisements. In the anime the passerby were witnessing the news about the Tiamat comet that destroyed a town where Mitsuha lived.
To get exactly the same shot as in the anime, you would have to fly a drone, which is most likely prohibited in Shinjuku area. 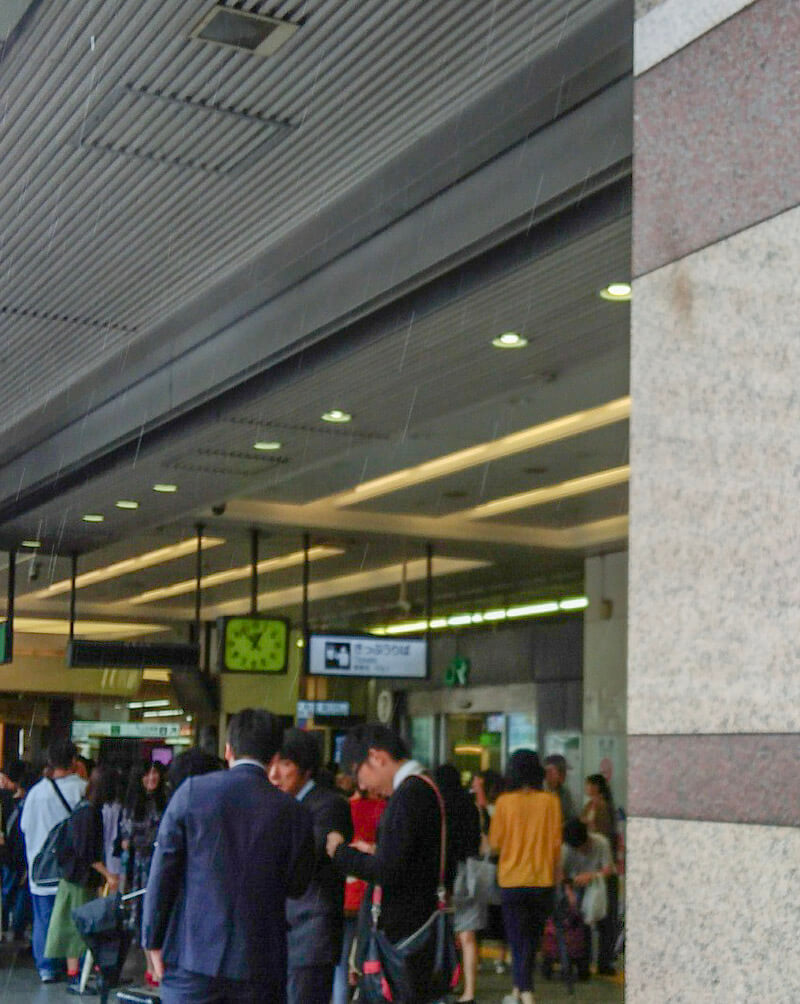 Compare this picture to the illustration on Maps.©Lucia Grey /JapanFor2

Featured on the cover of October 2016 MdN Design & Graphic Magazine is the South Exit of Shinjuku station. This place looks exactly like the anime in real life and is often used as a meet up spot.

As you walk out of the South Exit, you see the Shinjuku Bus Terminal across the road. 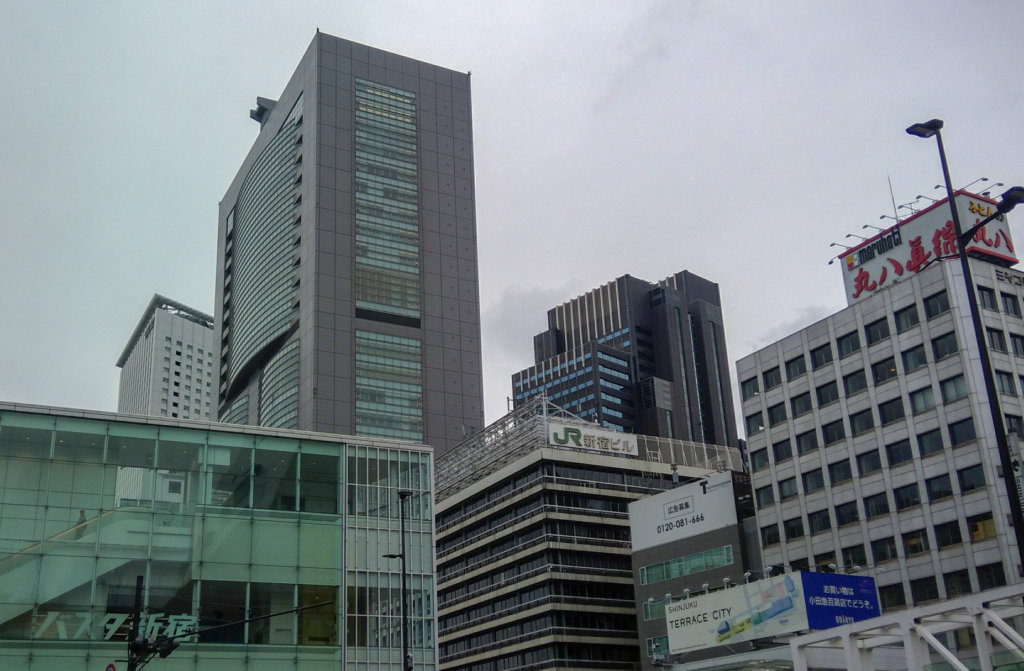 This was the spot where Taki stopped to check his phone. 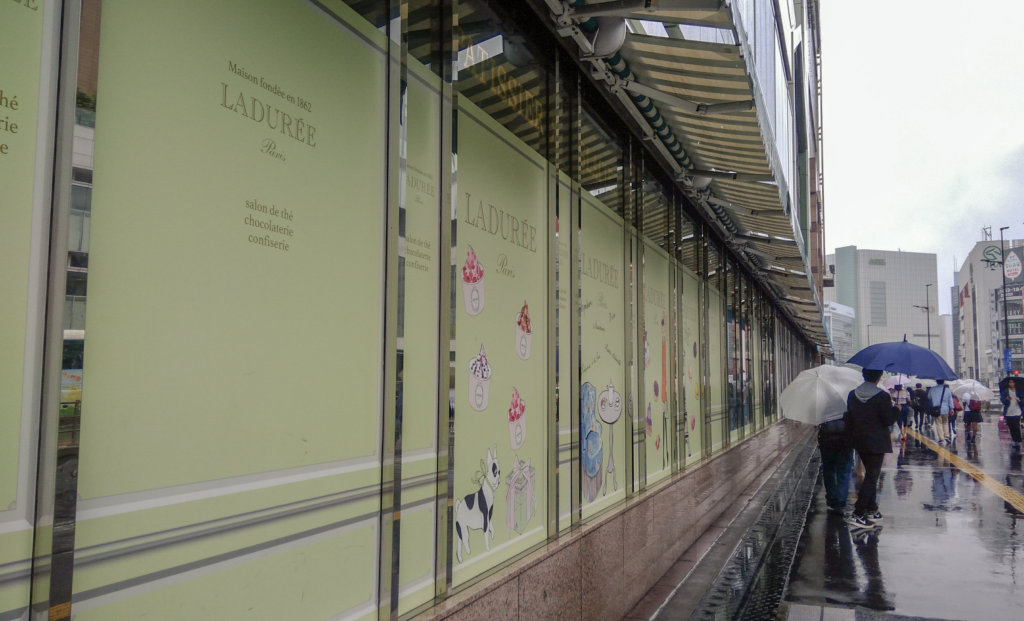 Below is a closer look of the delicious cakes behind the shop window. The macaron cake also appears in the anime. 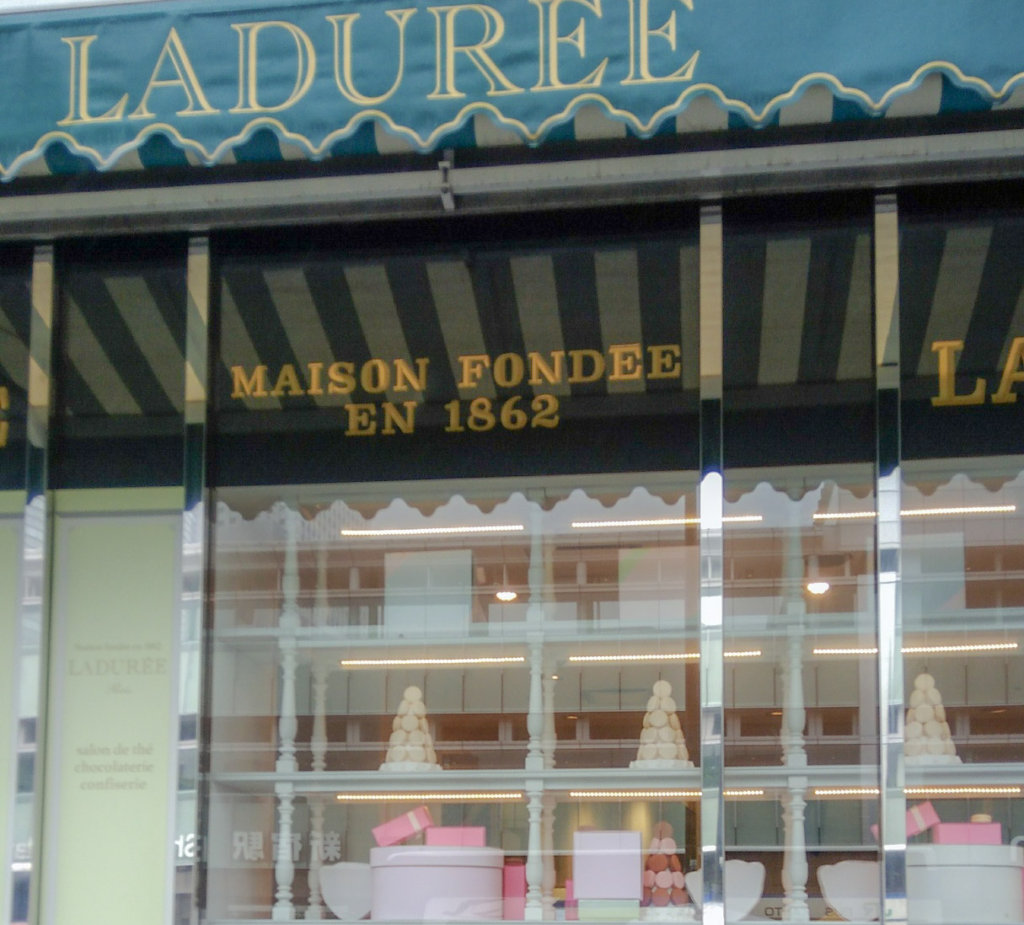 Turn left from the South Exit, and on your left will be the shop window where Taki was checking his phone. In the anime the shop window says “Pattisier” – a maker or seller of pastries and cakes, such as Ladurée.

A bridge to Shinjuku Southern Terrace 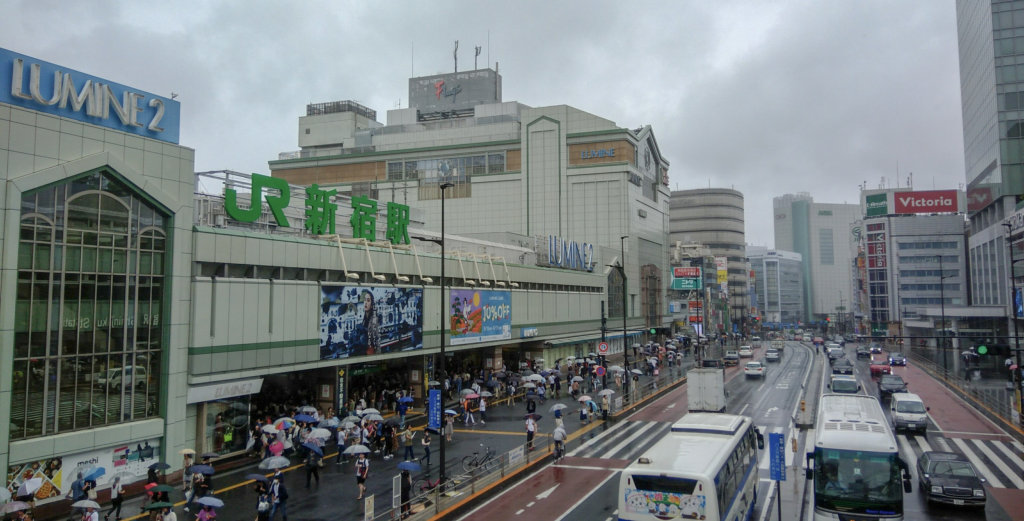 Mitsuha exclaimed “It’s Tokyo!” when she saw this scenery for the first time in her life. With numerous shops, neon ads and crowds of people, the view from the bridge near the South exit is an iconic location. To get there, turn right from the South exit and go up to the bridge. 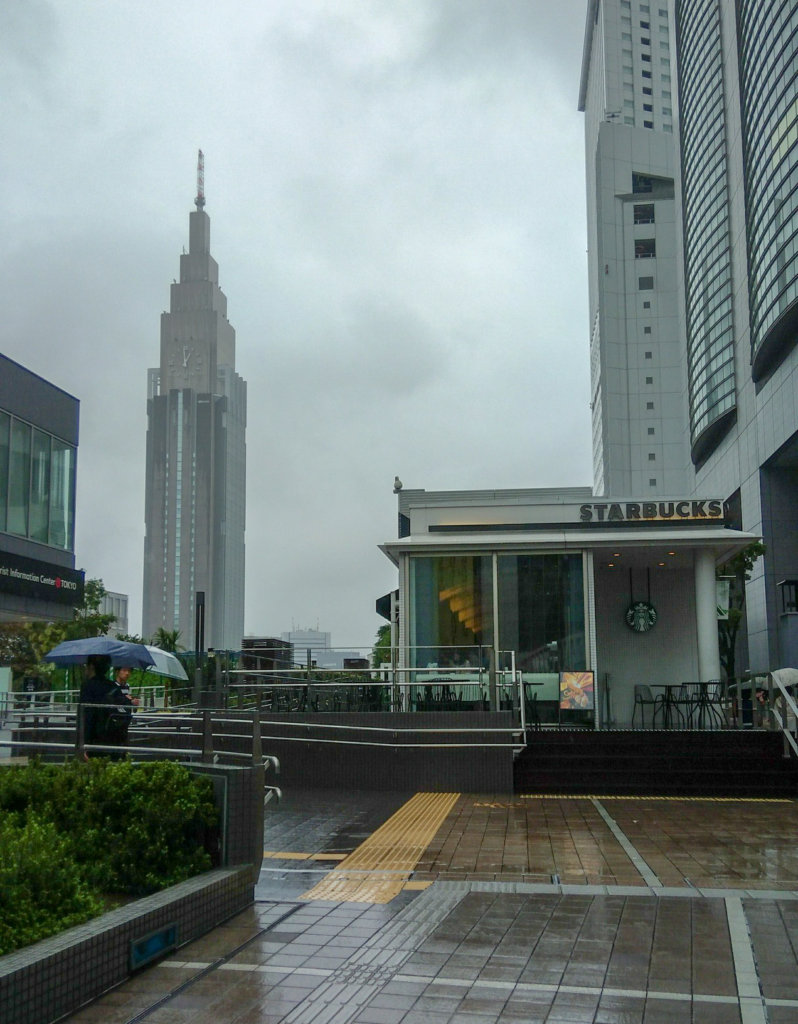 Look at the bottom part of the picture and compare to the reflection in the original illustration.©Lucia Grey /JapanFor2

Continue crossing the bridge and you will reach Shinjuku Southern Terrace – a pleasant outdoor shopping area with a great view of the NTT Docomo building. The Starbucks in front of you became the prototype of the café where Mitsuha’s friends met when they became adults.

Now, let’s come back to real Tokyo. I hope you and your partner enjoyed this fun walk! I can also recommend exploring other real-life anime locations from “Your Name” in Roppongi, Yotsuya and Shinanomachi next time!

Reporter
Lucia Grey
Bachelor of Arts
Currently living and working in Tokyo. Having educational background of Japanese language and culture studies, I love showing people Japan from a local perspective. When I am not hiking, bathing in onsen or eating my favorite seared salmon sushi, I usually plan my next trips while drinking endless cups of tea.

1-day date in Tokyo: Kabukicho and Shinjuku-sanchome
See & Do
Bar hopping in Tokyo Shinjuku: Golden Gai vs Omoide Yokocho
See & Do / Editors Pick
Day & Night in Tokyo Shinjuku: Lively and lovely
See & Do
Don Quijote: Where Minstrels Wander Late into the Tokyo Night
See & Do
The Best Date Ideas For When It Drizzles Down In Tokyo
See & Do / Eat & Drink / Editors Pick
Tokyo & Yokohama Shinjuku See & Do Shooting spot Pilgrimage