Summer in Japan is one of the most beautiful seasons: the trees are full of greenish leaves, the cicadas are always singing their beautiful (and noisy “songs”. Not only that, but the season brings a lot of interesting events. Many people are waiting for summer to enjoy different activities. One of the most representative summer events in Japan during summer is the fireworks display. These festivals are dynamic and popular among people from all ages; families, young couples and group of friends get together to enjoy food, dancing and the fireworks.
The fireworks festivals are held in July and August. All around Japan events are organized, such as the Sumida river firework (Tokyo), Minato Kobe fireworks (Hyogo prefecture), Naniwa firework festival (in Osaka – formed called Yodogawa fireworks) and Uji in Kyoto. Enjoying the firework display with local people in yukata – a casual summer kimono – will become a memorable experience for you and your partner.

In Osaka prefecture there are two big firework events: the Tenjin festival and the Naniwa fireworks display. There are also smaller display events around Osaka and Hyogo prefecture, such as in Ikeda and Itami cities. I will talk a little bit about these events.

This festival occurs in Osaka’s Tenmangu Shrine and it is one of the most famous festivals in Japan; together with Gion Festival (Kyoto) and Kanda Festival (Tokyo), they are considered the three biggest festivals in all the country.
Originally, the festival is performed to honor Sugawara Michizane and it has been celebrated for over a thousand of years. Tenjin festival is full of rituals and music; not only that, but it also has a big firework display.
Every July 24th and 25th the celebration is done with a huge procession of portable shrines – on land and by boats. The streets of Tenjinbashi and Nakanoshima become alive and full of people on these two days; people march beside the colourful portable shrines during the land procession. 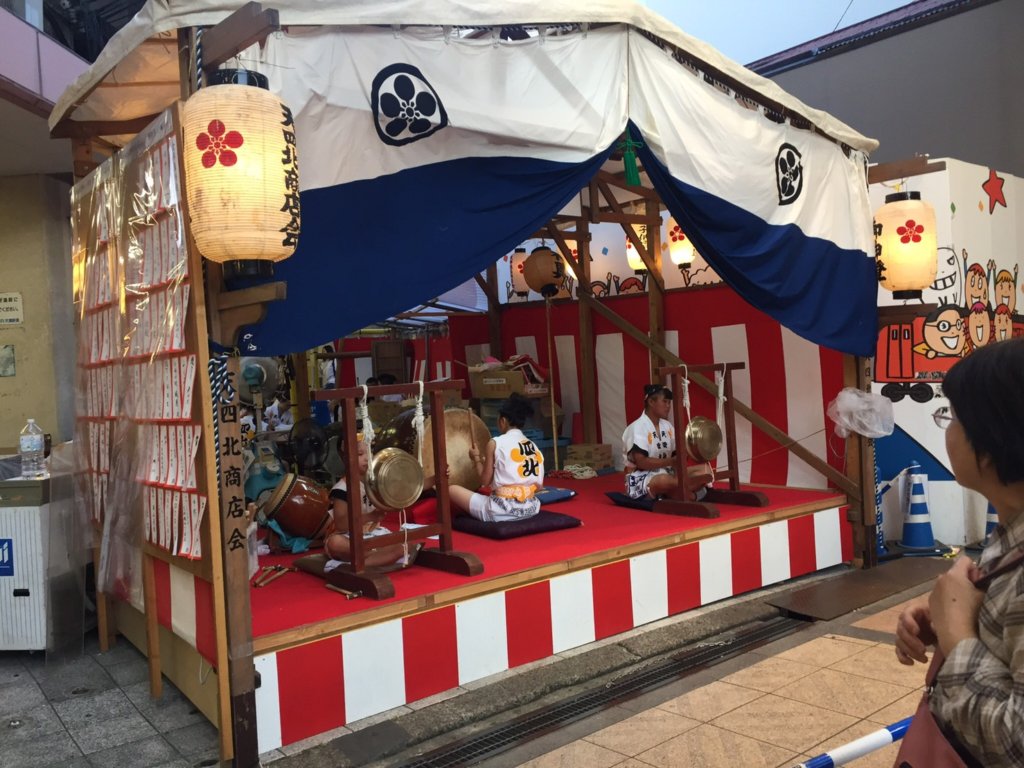 After the sunset of the second day, the procession continues by boat, specially decorated boats carry the shrines through the river, which makes the scenery unique and mystical. The festival climax is the firework display show over the Okawa River. The fireworks lasts for an hour and the end of the display marks also the conclusion of the festivity – then, the shrines are taken back to Tenmangu Shrine.
There are thousands of festival food stalls set up along the river in which you can buy the most delicious Japanese foods and have some refresh drinks.

This is one of my favorites firework displays in Osaka. Since I came to Japan, it became a special tradition to go to this event with friends. Naniwa firework festival was first prepared in 1989 and since that time it is the most iconic summer event in Osaka.
The area where the event occurs is located among three stations; Umeda, Juso, Nakatsu station (along Yodogawa river) and you easily reach the place by going from these stations. Thousands of spectators go there and it is really crowded. You can watch the fireworks from a private or general area. If you decide to go for the private area, you can watch the fireworks at a special seat with a good view. The tickets can be booked in advance; they are available online or in any convenience store. The tickets cost around 5000 yens (around $50).
If you want to try something different, still there is an option to watch the display from a boat. From this roofed boat, called yakatabune, you can have a unique and great atmosphere for the display.
However, if you decide to find a place by yourself to watch the fireworks, you should go early to save the perfect spot. Some Japanese go to the Yodogawa area early in the morning and use picnic ground cloths to save their place for the event.

Another impressive point about Naniwa fireworks is the large number of stalls placed on the area. Not only for food, but also some game stalls are prepared to entertain people before, during and after the fireworks. Some traditional Japanese foods are available there, such as okonomiyaki, takoyaki, yakisoba, fried chicken, shaved ice and so on. Moreover, you can get some prizes playing shooting games and ring toss; we cannot forget about the traditional scoop goldfish swimming in a water tank.

The mesmerizing firework displays goes on for an hour; the colors are vibrant and every year the fireworks become more and more beautiful and magical. Recently, they have incorporated different figures to the display: watermelon, heart, stars, frog and Doraemon shaped fireworks can be seen on Osaka’ sky during the event. Definitely, you should not miss the opportunity to watch this amazing spectacle in Osaka.

Another two famous firework displays occur in downtown Osaka and Hyogo. The event at Ikeda is organized jointly by Ikeda (Osaka prefecture) and Kawanishi city (Hyogo prefecture). The display happens along Inagawa River – the border of these two cities.
Since it is a smaller event, the infrastructure is not so grandiose as Naniwa firework, but it does not mean people will be disappointed going there. Every year, the place is packed of people that want to watch the incredible display. The fireworks can be seen from different spots, perfectly. Moreover, there are stands all over the place, serving good food.
Another firework display occurs at Itami City and it is organized by Hyogo prefecture. This display is held every year on the 3rd Saturday of August. It is charming and traditional; a differential point about this event is that its location near to an airport – Osaka Airport (Itami). This makes the scenery more interesting, because the planes land “close to the fireworks. If you are lucky and have a good camera you can take a singular picture. 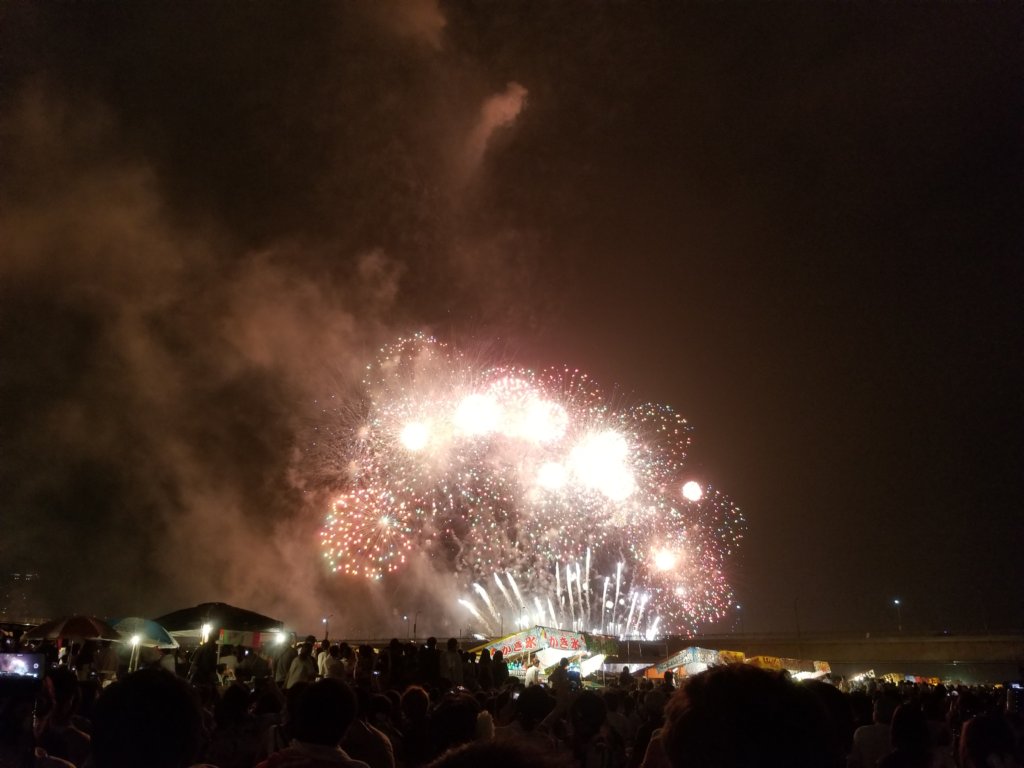 All these events in Osaka bring with them the Japanese spirit of summer. So, if you decide to visit Japan during the season, you must watch these firework displays and have this exceptional experience – wearing yukata, eating delicious food, taking amazing pictures and recording beautiful videos. Enjoy Summer time in the land of the rising sun to the fullest!!

Reporter
Carol
A Brazilian girl that is, day by day, discovering new things about herself and Japan.

-Kyoto- An adventure for two in Autumn: Kibune and mount Kurama by funicular railway
See & Do
Fun walk around Mt. Rokko and Mt. Maya
See & Do
Enjoying nature in Kyoto: eco fun adventures for couples
See & Do
Ⅾining in Kyoto during Summer: An unforgettable night out at the most traditional city in Japan
Eat & Drink
Minoo Park, enjoy the autumn colors and a good hot spring
See & Do
A perfect spot to enjoy the Autumn leaves and a romantic night view - Visiting Banpaku Expo Park
See & Do