Don Quijote is the peculiar name of a strange store that is ubiquitous throughout Tokyo and much of Japan. The store is considered a discount retail store, but it is known less for its cheap prices than for its eclectic merchandising and highly cluttered, seemingly random organization. In a country that prides itself for its neat, orderly, and extreme organization, Don Quijote is, perhaps, the ultimate opposite to a convenience store. 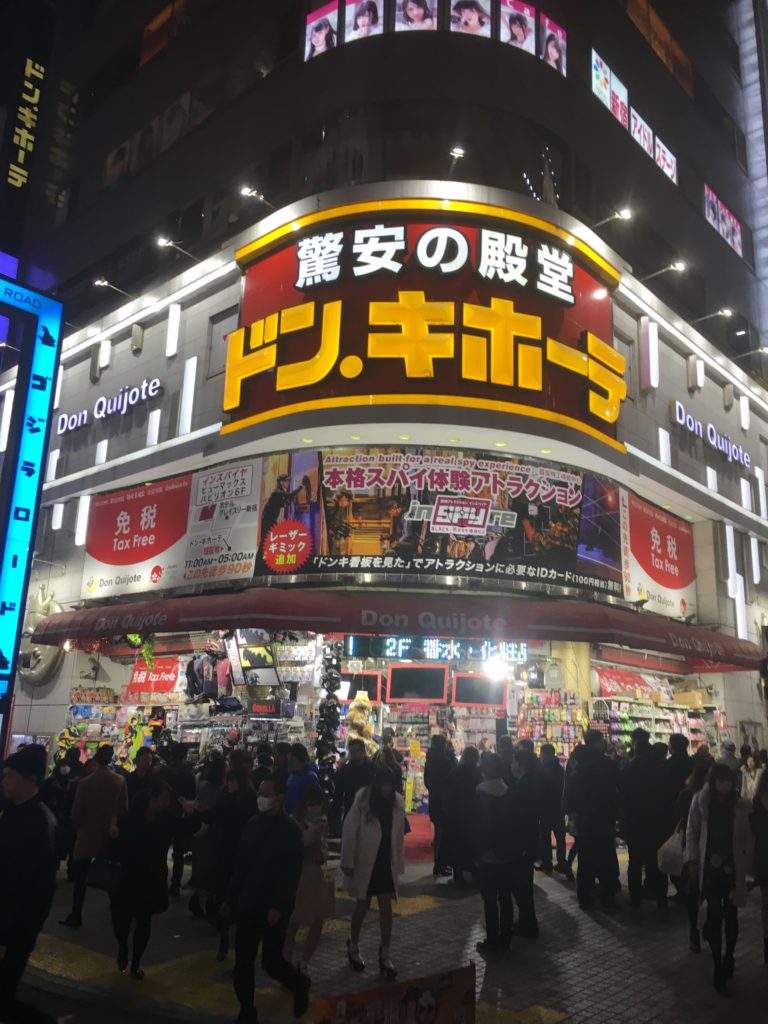 In most stores, neat rows and organization make it easy to find what you want. But in Don Quijote, you won’t find it easy to figure out how the rows are organized and many rows are blocked by discount bins, hanging displays, and an assortment of items that could only be described as random. This crazy layout is a big part of its attraction. What’s more, the shops in many locations throughout Tokyo are open 24 hours, making the store a destination for many a late night party goer in the city.

With its emphasis on being open late nights, city center and suburban locations, and eclectic merchandising, Don Quijote offers an intriguing selection of products catering to tourists, young people, and, even, couples. While it is still categorized as a discount store, you will find a unique selection of gift items – green tea-themed products and a wide selection of Kit Kats, for example, are huge hits, cosmetics, cosplay and adult “toys,” discounted alcoholic beverages, as well as a broad array of smartphone accessories in most of their stores. 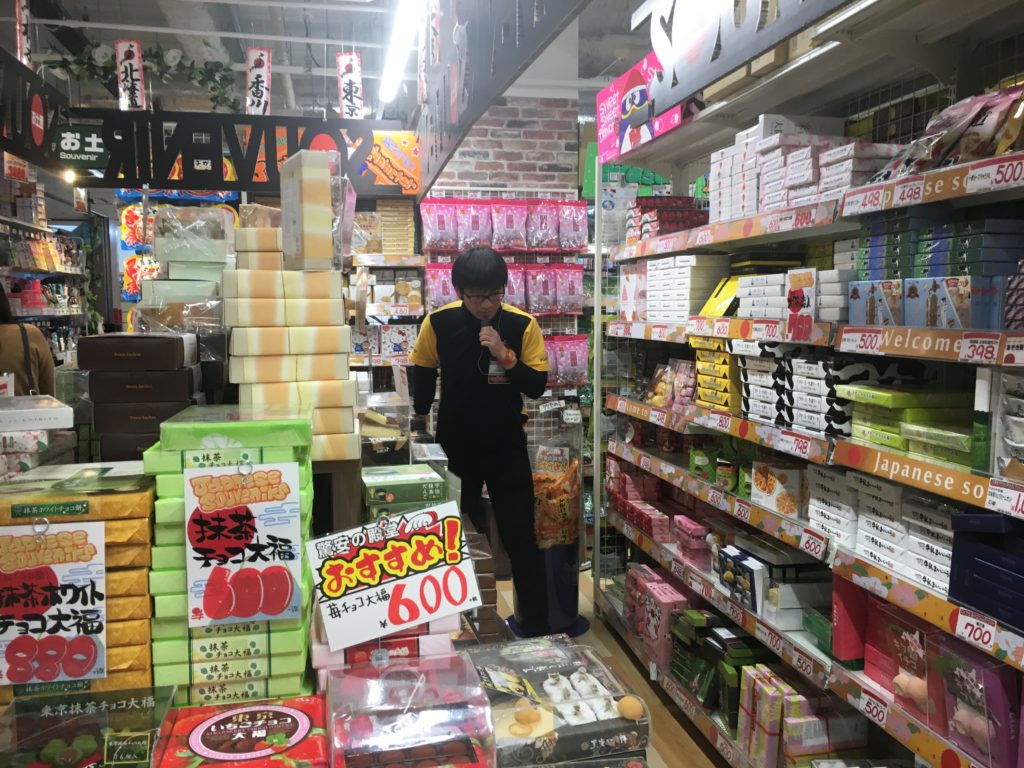 In the area around Shinjuku Station, you’ll find three Don Quijote shops: Shinjuku Tonanguchi, Shinjuku Kabukicho, and Shinjuku. Although all three branches are standard Donki stores, there are some differences between them. All three stores in Shinjuku are open 24 hours.

Shinjuku Tonanguchi is the most recent of the three Shinjuku stores. On the ground floor, there is a large pachinko parlor, making the entrance seem somewhat intimidating. Perhaps it is for this reason that this branch is much less crowded than most Don Quijote shops. it is also fairly well organized, too, and you’ll find plenty of bargain items. But being close to the station, you might find that there aren’t so many cosplay and other toys for adults.

The Shinjuku Kabukicho store is easily the most crowded of the three shops. It occupies 5 or 6 floors in a small building at the entrance to the main road into the heart of Kabukicho. This road leads straight to the Godzilla on the roof at the multi-theater movie complex that has become one of Tokyo’s most famous symbols. Here, you will easily get lost looking on the wrong floor for many items. If you’re not in a hurry and are just looking around for something interesting and very “Tokyo,” the Kabukicho store is for you. Although it’s closest to Kabukicho, the cosplay and toy areas are pretty standard – more fun than sexy.

The Shinjuku branch is the largest store in the area. It is a huge store, with large sections for designer goods, food, alcoholic drinks, clothing, home furnishings, cosmetics and medicines, and electronics. This store gets extremely crowded, too, but despite the long lines at the exits, there are so many cash registers in operation that the line proceeds quite quickly. Lot’s of couples and groups shop here.

Access to the stores is fairly easy. The Tonanguchi Store is the easiest, as it is just outside of the southeast exit of JR Shinjuku Station. In fact, its name, Tonanguchi, means southeast exit. The Kabukicho store is straight outside of the east exit of the station, along Yasukuni Dori, a major thoroughfare that is a frequent subject of photos of Shinjuku in visitor’s guides. The Shinjuku branch is on a street called “Shokuwan Dori,” which is on the opposite side of Kabukicho from Shinjuku station. It is actually on the side of the street that would technically put it in the Okubo area. 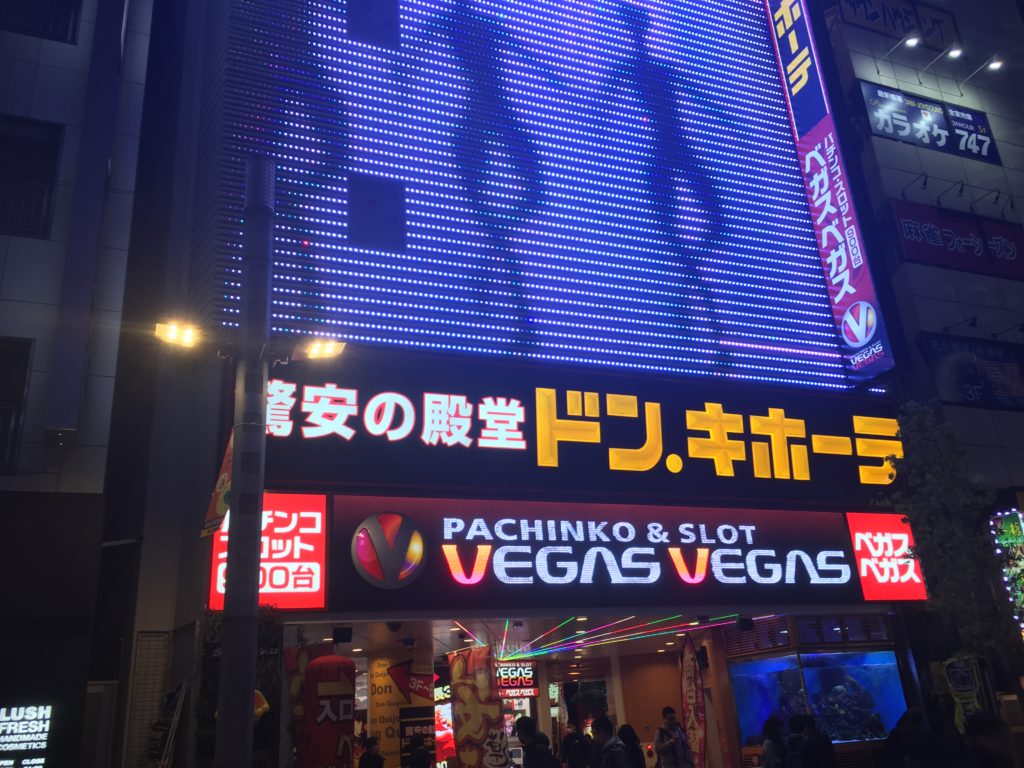 Other Donki Stores in Tokyo

While the Shinjuku stores are among their most popular, they surprisingly don’t have a large selection of cosplay and adult items. But some of the other branches, such as in Shibuya, Roppongi, Akihabara, and Ueno certainly fill the void. The Mega Don Quijote Shibuya Honten store is one of its most popular stores. But be warned, it is very huge. The Roppongi store is famous, not only for its premier location, but for the halfpipe amusement park ride that the company built on its rooftop. The ride has never been in operation, however, because of complaints from neighboring shops, who expressed concern that noise would be disruptive. The Akihabara and Ueno shops are known for their large collection of cosplay and adult items. The store in Tachikawa, too, is notable, for its large, in store bakery. In general, the branches that are somewhat outside of the city center tend to have more food and home items. With nearly 50 shops in Tokyo alone, there are a great many ways to experience Don Quijote.

-Tokyo- Two of a Kind: Souvenirs for Couples
Editors Pick
Viewing Pink Petals: The Cherry Blossoms, That Is
See & Do
Local Gourmet: Get a Taste of Backstreet Tokyo
Eat & Drink
Romantic Dinner for Two in Tokyo
Eat & Drink
-Shibuya- Trunk Hotel: Trend-Setting Hotel and Uber-Cool Hangout
See & Do / Stay
When you Trip, Fall into a Relaxing Hot Spring
See & Do

1-day date in Tokyo: Kabukicho and Shinjuku-sanchome
See & Do
Bar hopping in Tokyo Shinjuku: Golden Gai vs Omoide Yokocho
See & Do / Editors Pick
Day & Night in Tokyo Shinjuku: Lively and lovely
See & Do
Higashi-Shinjuku: a quiet base to fully enjoy your stay in Tokyo
See & Do
Fun evening date in Shinjuku
See & Do
Tokyo & Yokohama Shinjuku See & Do Shopping