Tokyo’s full of great places for foodies. You’re gonna love the sushi, tempura, ramen, yakiniku, and izakaya – Japan’s answer to the local pub. But although there are a lot of foods for uptown tastes, what about the down-town? What do Tokyoites eat in the backstreets?

Some would say yakitori, but that’s a food you’ll find, with minor variations, everywhere in Japan. To answer that question isn’t easy, but I think the best local comfort food in Tokyo is, undoubtedly, monja yaki, or monja. there is nothing else quite like it anywhere else in Japan. 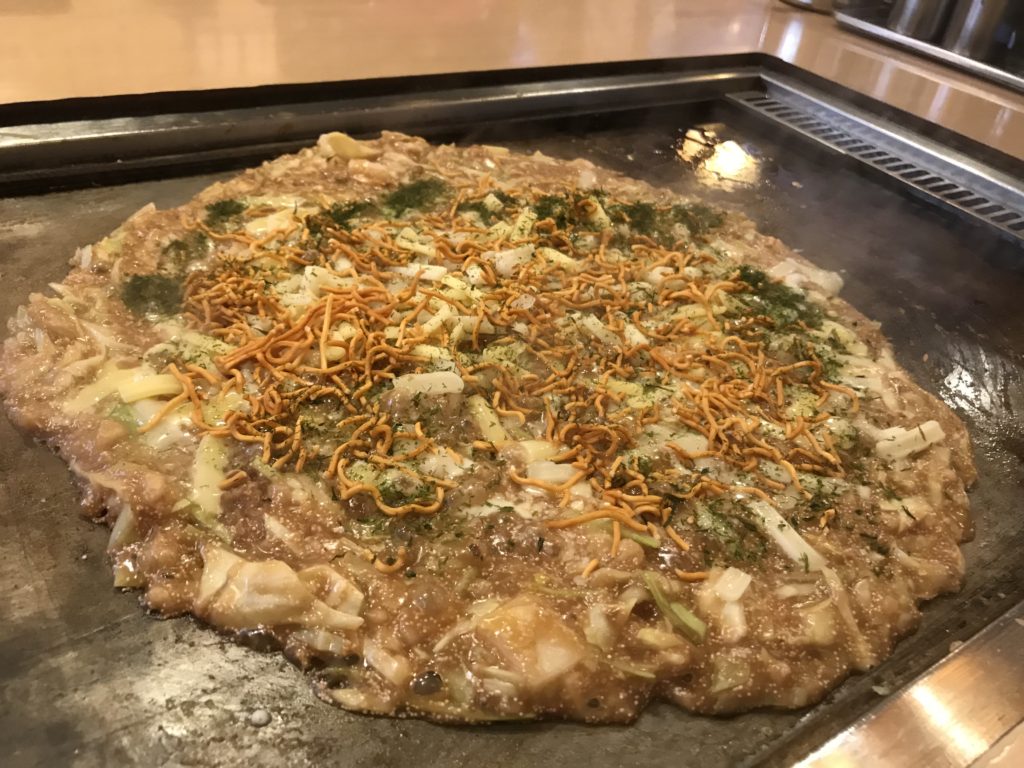 Monja is stirred, hotplate-cooked, liquidy, and messy food – that is delicious. It is really very difficult to describe, but it is something like okonomiyaki – often called Japanese pancake – but it doesn’t have any particular form.

It’s really basically a thin, soupy paste, made with flour and dashi (Japanese soup stock) and a bunch of ingredients to your liking, but usually with cabbage, seafood, and often cheese and crunchy ramen.

This mixture is poured onto the hotplate grill and cooked until it is cooked. It is very difficult to tell when it is ready, but you have to trust your eyes and the smell. You eat it with tiny spatulas, which you use to scoop a tiny bit at a time, because if you scoop too much, it’ll burn your tongue or entire mouth! 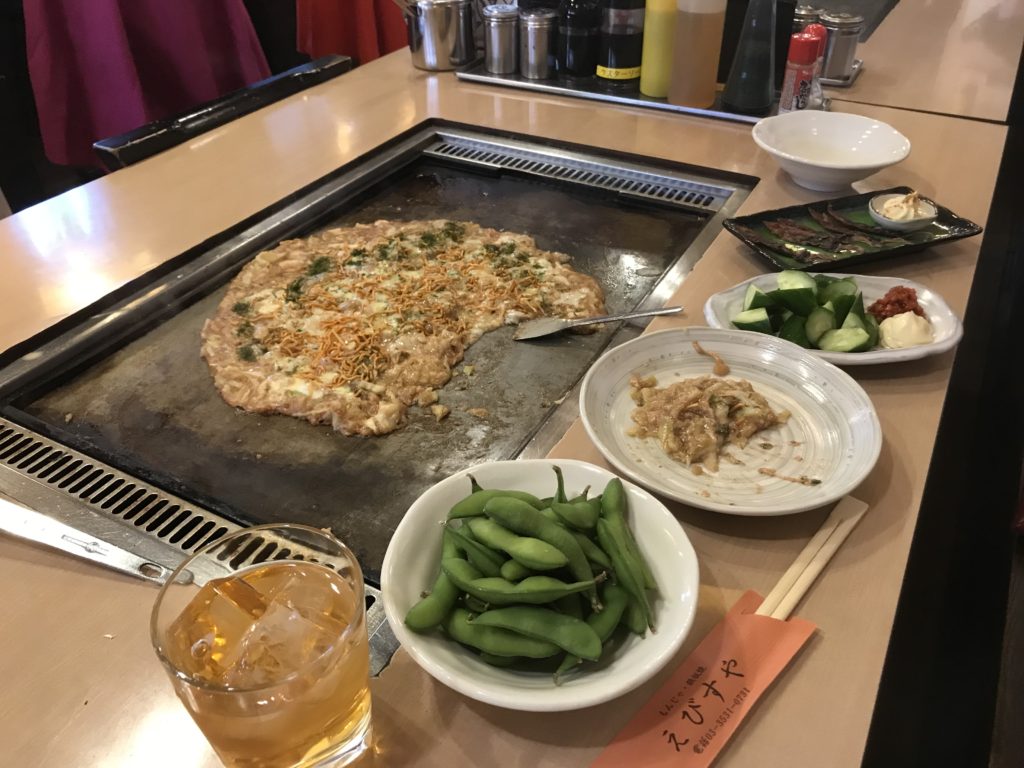 Where to eat Monja

Monja used to be a popular snack food that you could find in most of the eastern side of Tokyo, mostly in small shops – dagashi-ya – that sold snacks for kids. In these shops, you could find, in addition to a whole variety of tiny snacks both sweet and savory, small grill tops where kids would make tiny monja to eat as after-school snacks. Although shops that sell dagashi are experiencing a comeback, monja are no longer a staple of these kinds of shops.

Monja is now commonly found in many okonomiyaki restaurants in Tokyo. But without a doubt, the best place to find monja is in Tsukishima. Tsukishima is a small island in the Tokyo Bay, just outside of Tsukiji – home of the world famous fish market – and not far from Ginza. If you make your way to Toyosu, where the new fish market is being built, or Odaiba, where the main center of the 2020 Olympics will be, then chances are you will pass through Tsukishima. 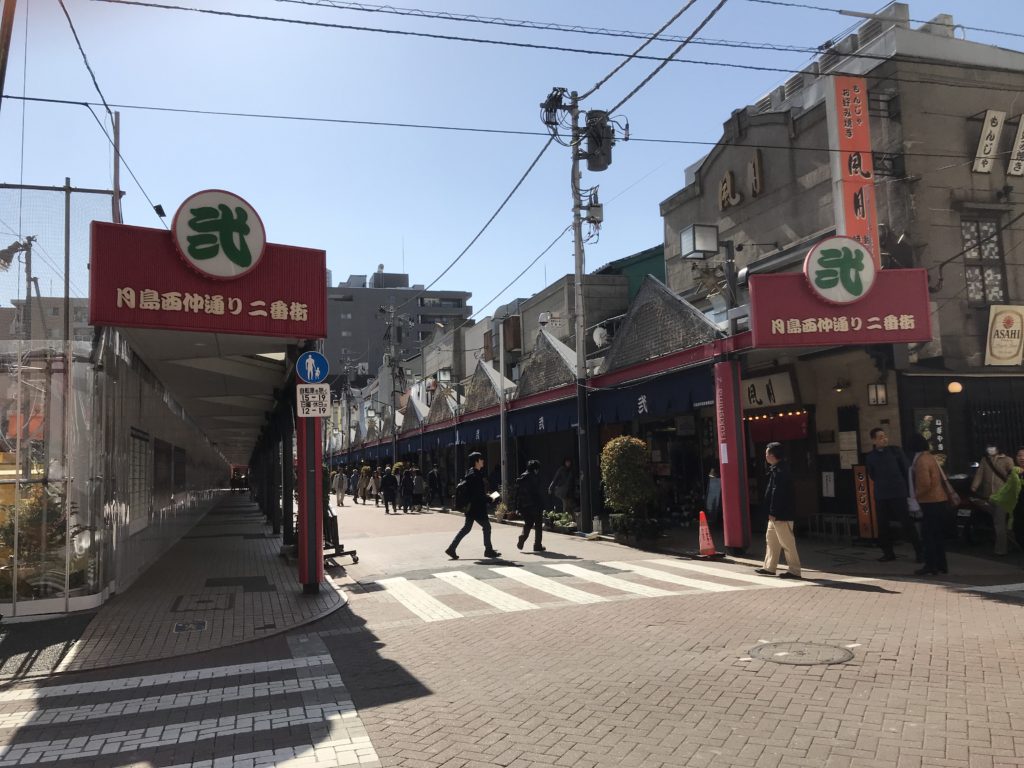 Tsukishima’s love affair with monja is so deep that there is a whole area, called Tsukishima Monja Street, with more than 70 monja restaurants. It isn’t actually one street, nor is it an official name, but the association of restaurants have made it the area’s name.

As for which restaurant to eat at, it’s a toss-up. Actually, monja is really simple to make, so there is very little difference between the eateries. Or, even though the batter may be a little different, since you cook it yourself, it ends up being original every time, so it doesn’t matter where you eat. Just find a shop that looks right for you, and it’s probably perfect. Or, ask your partner – he/she always knows best!

If you are a couple – two is always better than one – then the best thing is to eat (in this order) one monja, one okonomiyaki, and finish off with a yakisoba (or udon). Monja always goes first. It is the most simple to make and cooks quickly. The okonomiyaki takes longest to cook, and it is the heartiest to eat. The noodles is the best to eat last.

As for toppings, try them all! Well, that might be difficult, but I would make sure to try a variety. I suggest seafood and cheese in the monja, meat and spicy kimchi in the okonomiyaki, and some simple veggies for the yakisoba. 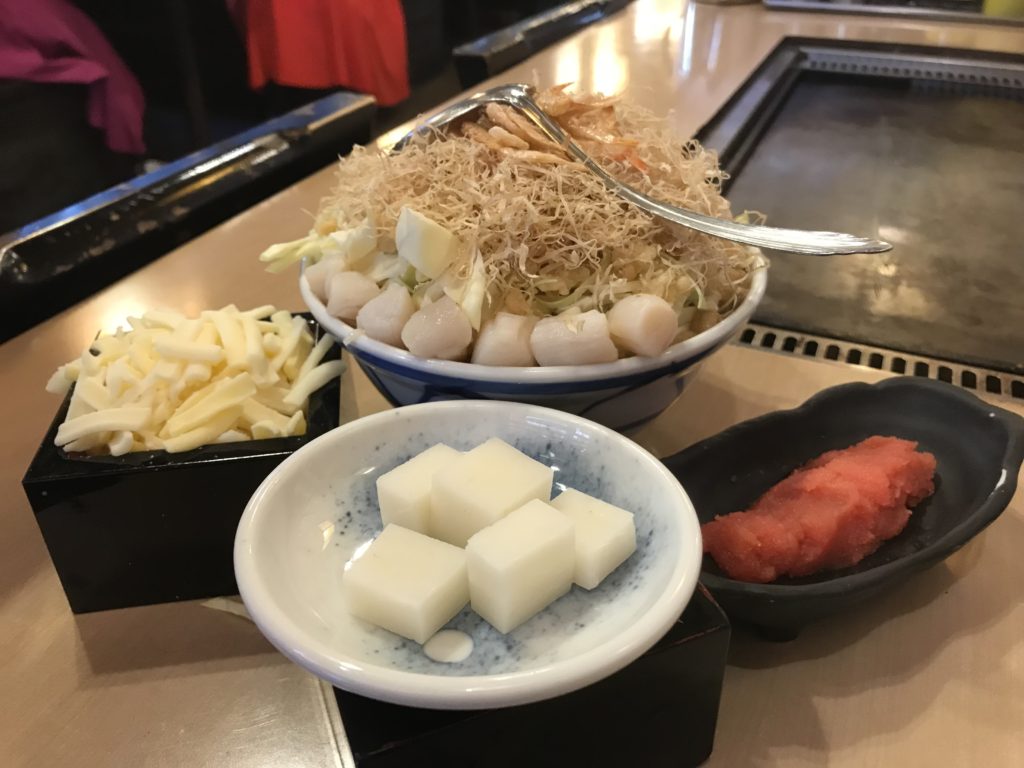 If you are still hungry, many of the restaurants serve shaved ice, which might be necessary if you’ve burned your tongue or mouth. Also, it is generally accepted that everyone orders at least one dish. That is usually easy. Drinks are optional, but whether it is beer, a cocktail, sake, or oolong tea, a meal in Tsukishima will make you thirsty. More importantly, a meal here will leave you hungry for more monja. If you’re like me, you’ll want to try every one on the menu!

-Tokyo- Two of a Kind: Souvenirs for Couples
Editors Pick
Viewing Pink Petals: The Cherry Blossoms, That Is
See & Do
Romantic Dinner for Two in Tokyo
Eat & Drink
-Shibuya- Trunk Hotel: Trend-Setting Hotel and Uber-Cool Hangout
See & Do / Stay
When you Trip, Fall into a Relaxing Hot Spring
See & Do
Don Quijote: Where Minstrels Wander Late into the Tokyo Night
See & Do