Hanami is what the locals call it; literally, it’s called flower-viewing. People, droves of people, go out into parks and gardens to watch the flowers. Some people start with plums, then cherries, and even peaches and other flowers. But the crowds are for the cherry blossoms. 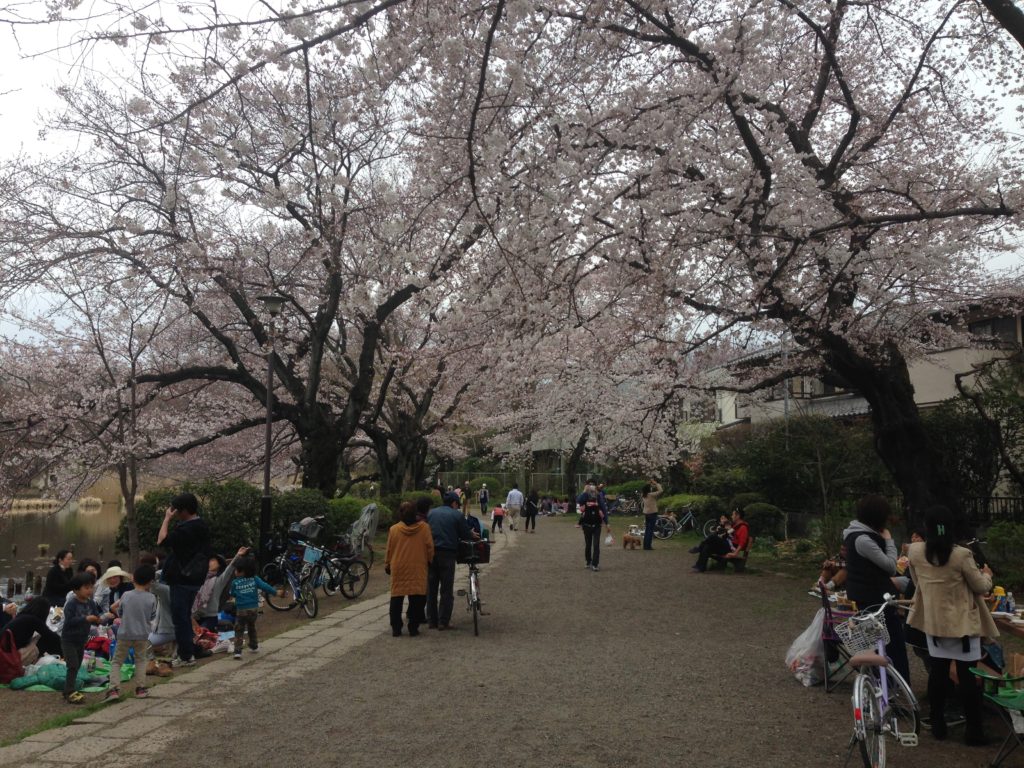 People go out during all hours of the day and night. Office workers will go and eat lunch outside for a glimpse. They’ll go out with picnic sheets and blankets at night and on the weekend, with food, drink, and many pints of beer, wine, sake, and other beverages.

Drinking outside is not only legally permissible, in Japan, but in spring it is nearly a cultural duty. So go with the crowd, and hang outside underneath the cherry trees and have a party! Some of the best places to do this are right in the heart of Tokyo. Every year, around late March and early April, you’ll see people gazing up, not at the clouds or the stars, but at the falling blossoms. 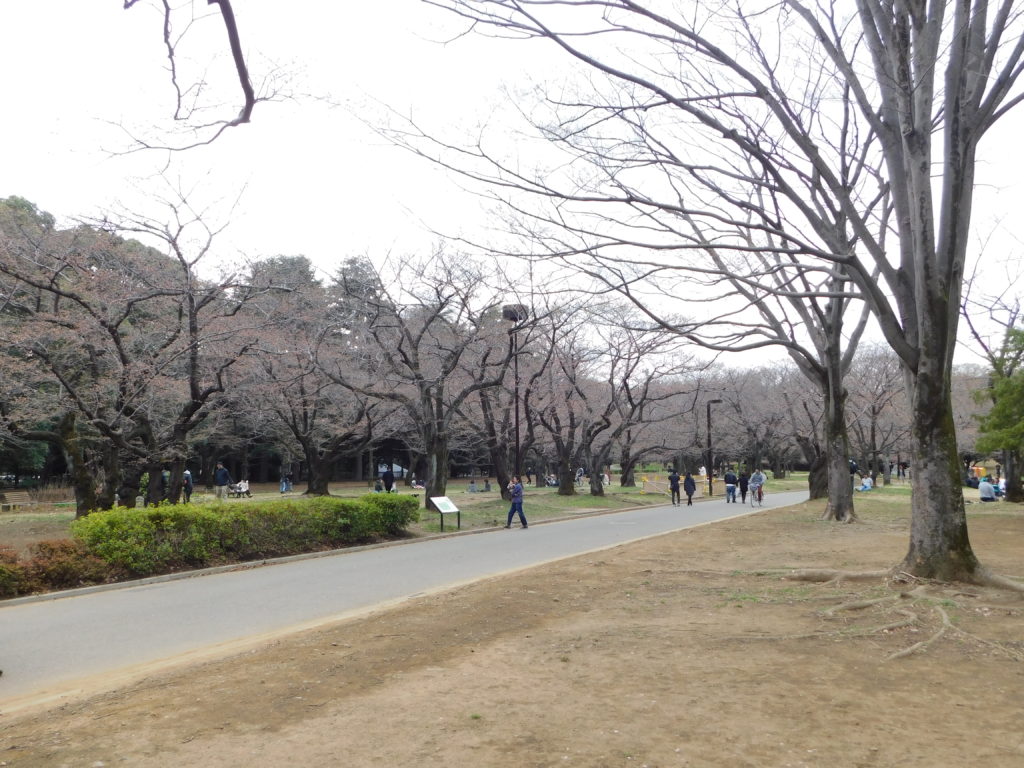 Located next to Harajuku Station and Meiji Jingu Shrine, you’ve probably already been by the park already. You can walk there from Harajuku Station, of course, but it’s also not far from Shibuya or Yoyogi Station. There are also subway stops that are nearby, including Yoyogi Hachiman and Yoyogi Koen, which is the name of the park in Japanese.

The park is one of Tokyo’s largest, which is why it’s close to so many stations. If you go during the peak cherry blossom season, though, it will be difficult to believe that it is a park. Pretty much everywhere you look, there will be people sprawled out on the ground, eating, drinking, making music, and having a party. Most of the areas that will be open are the walkways – you won’t be allowed to sit there. The paths, too, though, will be crowded. The people will be walking in every direction, looking for a place to sit, throw away trash, to find the back of the line to go to the restroom, and to find their friends.

If you look around for awhile, though, you’ll find a good spot – or your friends. The flowers are beautiful, of course. But it is the party scene, the youthful vibe, the international appeal, and the mayhem that makes Yoyogi Park a winner. 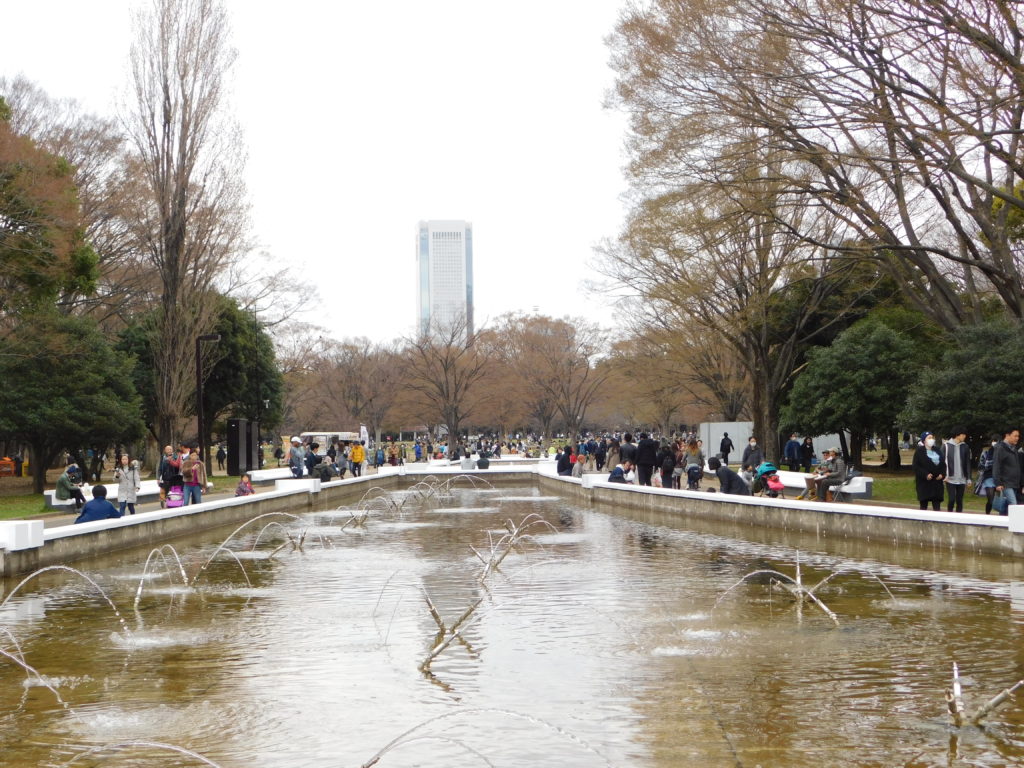 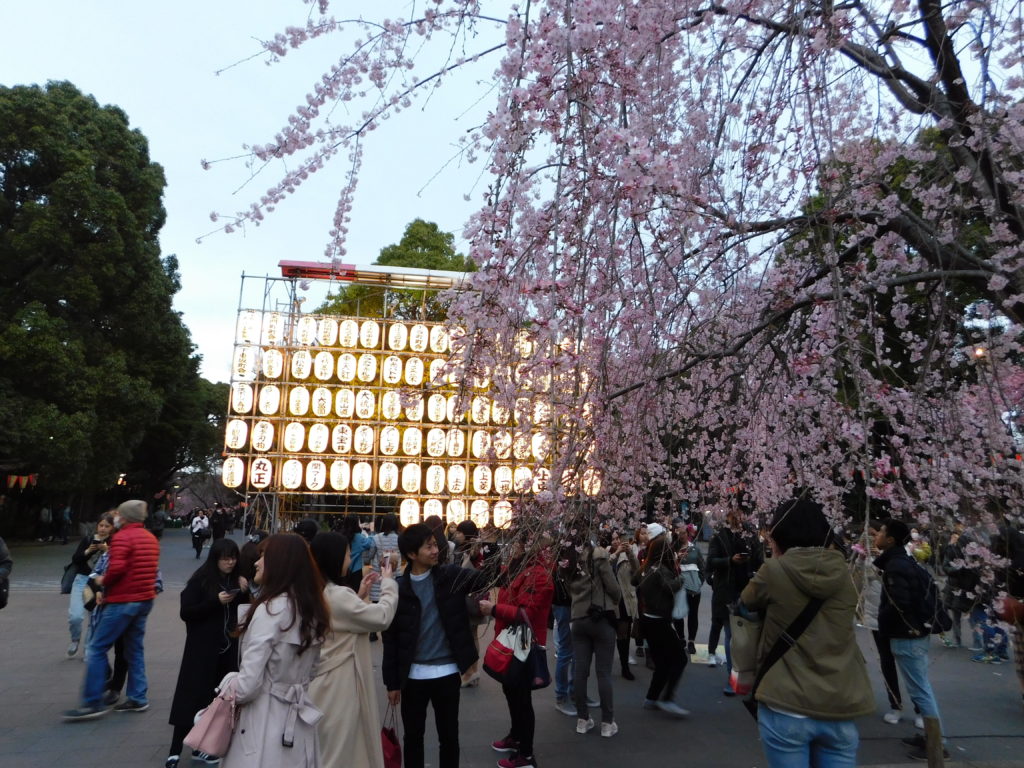 Ueno Park is another huge park, notable for its zoo. It’s the zoo whose symbol is the giant panda. But during the cherry blossom season, the bigger zoo is throughout the park.

The park itself is accessed from The Ueno Park exit of Ueno Station. From there, you will immediately see that there are thousands of cherry trees in Ueno Park and that there are millions of people who come to see the blossoms. The best area – well, most crowded, at least – is in the main promenade in front of the main zoo entrance. Here, people will party not only under the trees and in the gardens, but in the walkways. It gets so crowded here that it becomes gridlock.

The vibe here is somewhat older than in Yoyogi and something about it is more traditional. Part of it may be the atmosphere itself, with so many museums and important temples in the vicinity. But it is the area itself, around Ueno, Yanaka, Hongo, and even Asakusa, that lend a more traditional, even ancient aura to the hanami parties here. But be warned, many of these parties are all-nighters. Of course, if you find that you and your partner are nodding off of the party, there is a hotel district nearby, where you will easily find a place to rest or stay. 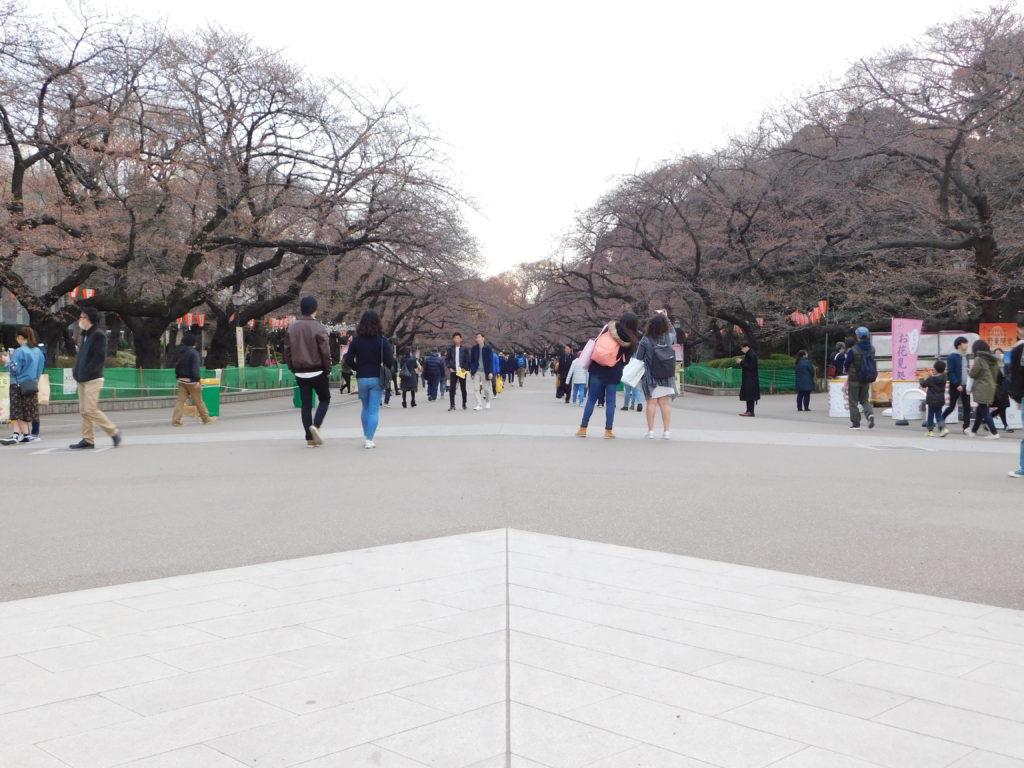 Possibly the best cherry blossom viewing location in Tokyo is Shinjuku Gyoen. This park is a special one, not only because it is a special “gift” from the Imperial family to the city, but because there is an entrance fee to visit. The fee is only ¥200, but it is enough to keep the crowds away.

There are two other park policies that ward off revelers. The first is that the park is only open between 9:00 to 4:30. The second is that the park has a ban on alcohol. For these two reasons, plus the ¥200 yen fee, Shinjuku Gyoen is the most quiet, relaxed, and beautiful place for cherry blossom viewing in Tokyo.

The park is actually composed of three gardens and an arboretum. The gardens are in the style of an English, French, and traditional Japanese garden. It was a favorite place to play for the Showa Emperor, so much so, that his funeral was held in Shinjuku Gyoen!

Because of the quiet and the really gorgeous settings, Shinjuku Gyoen is probably the most romantic hanami spot in Tokyo. 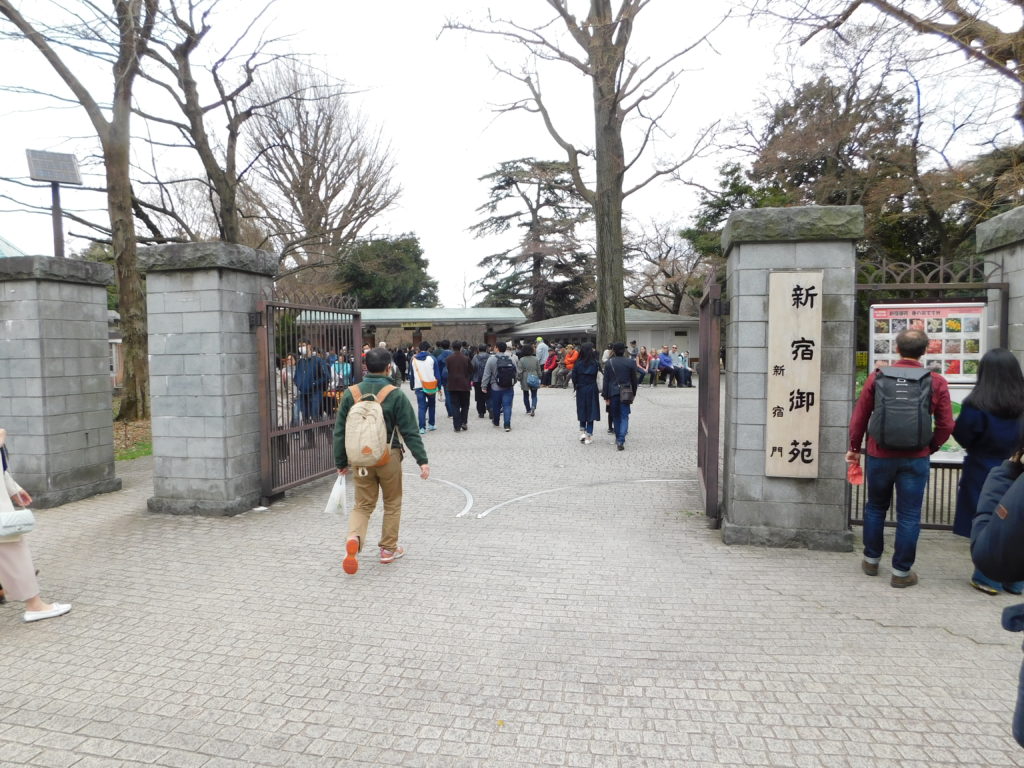 During the blooming season, you will see cherry blossoms everywhere. Most parks, temples, shrines, and shopping arcades have cherry blossom trees. In most places, there will be people day and night sitting under the trees, usually drinking sake or beer, and enjoying food and friends. Don’t miss the chance to sit under the falling blossoms and enjoy the country that celebrates flower watching. Many people think that it is the best time to visit Japan. It’s very romantic, don’t you think? 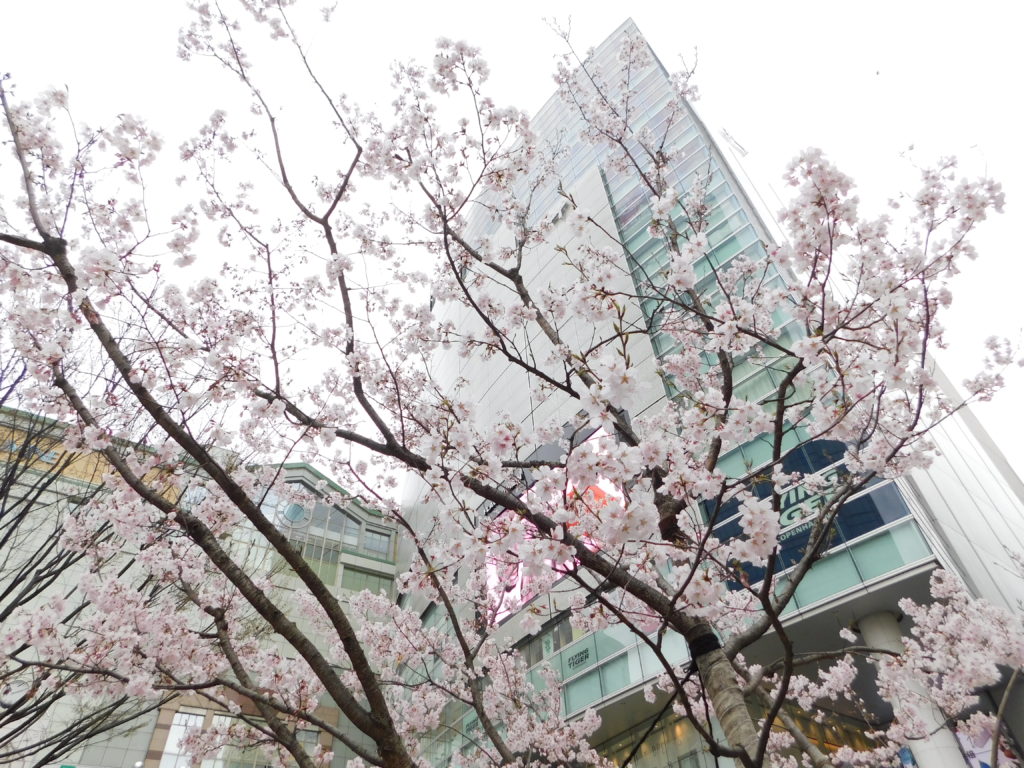 -Tokyo- Two of a Kind: Souvenirs for Couples
Editors Pick
Local Gourmet: Get a Taste of Backstreet Tokyo
Eat & Drink
Romantic Dinner for Two in Tokyo
Eat & Drink
-Shibuya- Trunk Hotel: Trend-Setting Hotel and Uber-Cool Hangout
See & Do / Stay
When you Trip, Fall into a Relaxing Hot Spring
See & Do
Don Quijote: Where Minstrels Wander Late into the Tokyo Night
See & Do